From DayZ Wiki
Jump to: navigation, search
This article may need cleanup to meet quality standards.
Please help improve this article if you can. The Discussion page may contain suggestions.

This article is a stub. You can help DayZ Wiki by expanding it.

This page is part of a Project.
Please visit the DayZ:Projects page for additional information on how to assist with this effort.

Water is a core character stat in DayZ Standalone, which represents the character's current hydration levels through intake of water.

As with Energy, hydration is lost through one's metabolism at all times, a process that is increased with activity exertion. This means that it must be constantly replenished in order to remain alive and not become dehydrated. This is done through consuming food and drink.

Water is vital for the long-term maintenance of a character. Hydrated Survivors are less liable to the effects of dehydration, and maintaining a healthy water intake keeps blood regeneration rates high as a result of a good blood-water content. At one of the lowest starting values of the core character stats, giving attention to your water level at all times is necessary.

As in real life, water is constantly required due to a character's metabolic system which means that, as water is transferred to the stomach, it is also expelled and used for bodily function. Therefore, similar to Energy, it is one of the few character stats that will not remain constant.

Lost through varying degrees of exertion, a Survivor's water levels are affected by their activeness, as seen below. 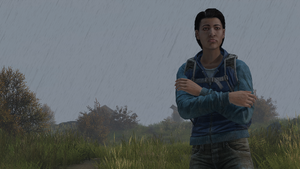 At very hot and cold temperatures, one's hydration levels are constantly depleted in addition to the background usage. This is likely due to the evaporation of sweat or lack of humidity causing a loss of water.

Dehydration occurs as a result of a low water level. At less than 300 water, Health is lost at a rate of 0.2 per second. This continues until the character dies of dehydration or replenishes their fluids above this threshold.

A Survivor's water levels affect how quickly they can regenerate lost blood. The water and energy levels act as multipliers to a final blood recovery rate as seen below.

* Values are approximate and depend on several factors.