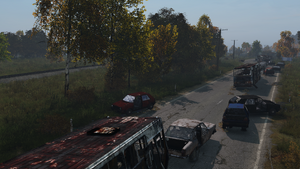 A traffic jam of abandoned cars along Bay Tikhaya.

Vehicle Wrecks are the inoperable and abandoned remains of vehicles found throughout Chernarus. Often a sign of civilization, car and bus wrecks can be found within towns and cities and are often a modest source of loot such as food and vehicle parts. Other wrecks have more specific purposes, such as helicopter crashes and police cars, which spawn dynamically based upon the game's settings and location. Due to their prevalence along roads, densely populated traffic can present a challenge for motor transport.

In addition, there are also several other types of wreck which are unique in nature: