From DayZ Wiki
(Redirected from V3S)
Jump to: navigation, search
This page contains information about a DayZ item that is currently not spawning/craftable, and/or is not functional - but is not a removed or replaced item, in Stable branch.
The information on this page does not apply to the current version of the game or the content is not available.

M3S is a vehicle available in DayZ Standalone. It was the first functional vehicle to be implemented in the game.

The M3S was the first vehicle added to DayZ Standalone. It was also featured in the DayZ Mod, and was favoured for being able to withstand a substantial amount of gunfire and general abuse.
It currently spawns in and around Towns and Cities.
You can drive roughly around the map once before needing to refuel the truck.
The truck cannot be refueled directly from a Gas Station, but you can, however, transfer the fuel from the pump to the vehicle using Gasoline Canister.

The V3S is the slowest vehicle in DayZ. It has a maximum speed of 58 kph when driving on flat ground or down a slight hill. Driving uphill drastically impacts acceleration.
Holding down the L. Shift key to give the vehicle more throttle helps to overcome this.
1st gear ends at 8 kph, 2nd gear at 12 kph, 3rd gear at 30 kph, and 4th gear at 58 kph.
Acceleration between gears is slower in the Cargo variant.

You can drive it through bushes and the white reflectors that line the sides of some roads, but not trees or other objects.
In addition, hitting a solid map object with the truck can damage or destroy the front tires, headlights, and/or cause a fuel leak.

Zombies cannot attack you while you are inside the truck, and players using melee attacks cannot hurt you as long as the doors are closed.
Players using guns can, however, shoot you through the windows and larger calibers can penetrate the truck's hull.
You cannot currently shoot or otherwise attack while inside the truck, regardless of what seat you are occupying.

This truck has nothing but a cab for two passengers, a bare-bones version.
Faster than the cargo variant but serves only as basic transportation, as it has less cargo space. 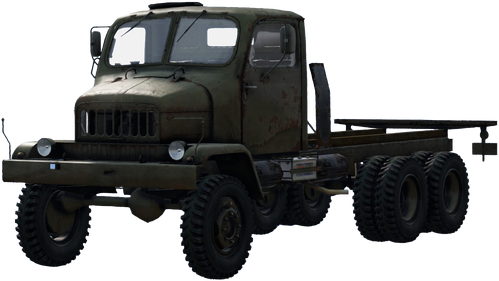 Much more useful than the Chassis Cab because of its increased cargo and passenger capacity, but slower due to its extra weight.
This variant has a semi-enclosed rear cargo bed with benches for up to 8 passengers (plus 2 people in the cab). 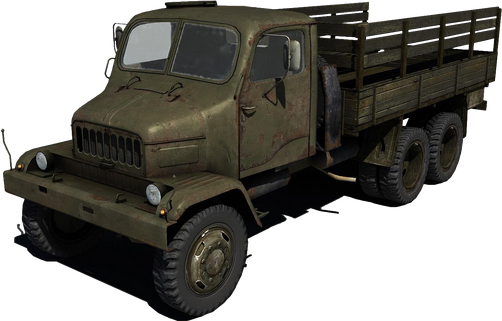 The following parts are necessary to get the M3S operational, as of v0.61:

The following parts are optional, but recommended for the safety of vehicle occupants:

Damaged wheels will reduce grip and can make it impossible to drive the truck uphill. A Tire Repair Kit can be used to repair damaged wheels.
The wheel must be removed before damage can be assessed and repaired. You do not need any tools to remove a wheel from the vehicle.
Wheel removal is done through the action menu, by moving the wheel into your hands. Attaching is done the same way, but with a wheel in your hands.
Ruined wheels can not be repaired and must be removed and replaced with a new wheel.


The truck can be driven with some missing wheels but will have reduced speed and handling. Losing the front wheels will make steering almost impossible.
Damage to any wheel negatively affects the top speed and acceleration. Damage to the rear wheels reduces the truck's grip and may cause it to spin out while turning.
Emergency repairs can be made by moving middle wheels to the rear.

Damage to the engine will reduce the speed of the truck. As of 0.61, engine damage cannot be repaired by players.

A damaged fuel tank will leak fuel and quickly run dry. This generally occurs if a truck hits something hard enough to ruin the front wheels, but may occur without destroying the wheels or may not occur even though the front wheels are ruined. As of 0.61, the fuel tank cannot be repaired by players.