From DayZ Wiki
Jump to: navigation, search
This page contains information about a map created by Bohemia Interactive that is playable in previous BI titles.
Playable locations featured on this article are part of the overall Arma universe, and are referenced throughout DayZ.

Takistan is a fictional Central Asian country located near the fictional Green Sea. It borders the fictional country of Chernarus. The country is not featured in DayZ Standalone, however it is mentioned in-game through maps found within school buildings.

Takistan border (left) as seen on a map of Chernarus in-game.

Takistan is a combination of mountainous and desert terrains with few rivers. Areas of it are fertile, stimulating the production of crops including cannabis and poppy. This is due to the huge amount of snow covering the mountain peaks during winters. Unfortunately, this water only runs into several streams and rivers, surrounded by the green areas in otherwise desert-like landscape. All of the local settlements are build around these water supplies.

It shares a eastern border with Chernarus, and a northern border with Russia, as seen in-game on maps around Chernarus. In ArmA II: PMC, it is shown Takistan also shares west and southern borders with the countries Ardistan and Karzeghistan.

In 636, the Takistani kingdom was formed by Muslim tribes, who conquered the whole area of modern Takistan and parts of several surrounding countries. The kingdom prospered until 1219, when the country was overrun by Ghengis Khan and his empire and the royal Takistani family was exiled.

After decline of Mongolian empire in 16th century, the Takistani kingdom was divided into multiple provinces controlled by neighboring kingdoms for next 300 years.

In the 18th century, the descendants of the original dynasty returned from exile in Istanbul and renewed the Kingdom of Takistan.

In 1892, Takistan became a formal feudatory of Russian Empire, providing a wild, hostile and scarcely inhabited buffer between Russian territory and British expansion.

The Kingdom of Takistan, affiliated to the Western world, existed until the coup d' état in 1988.

Following the fall of the incumbent monarchy and second exile of the royal family, Socialist and Royalist groups fought for supremacy in Takistan.[1] Each faction was backed by world-leading superpowers (Royalists by the USA, Socialists by the USSR), providing support to retain strategic control over the nation's rich resources, particularly its vast crude-oil reserves and huge deposits of precious-metal ore.

Reinforced by the open Soviet and Russian military support and large shipments of Eastern weaponry, the Socialists prevailed in 1992. Despite this, pockets of local Royalist tribesmen remained. The supply of crude oil at hand was quickly exploited to expand and strengthen the Takistani state police and armed forces. Scud-B ballistic missiles, missile carriers, and the covert research and development of chemical weapons contributed to the proliferation of military stockpiles with the aim of maximizing Takistan's military might.

On April 17th 2012, Royalist tribes, with the rumored support of CIA operatives seeking to destabilize the dangerous regime, succeeded in significantly damaging the production of crude oil. A well-coordinated raid on key oil fields dealt three critical blows to the regime: the loss of a year's production of crude oil, the destruction of 68% of the country's oil wells, and the sudden lack of resources required to hold Takistan.

Power structures started to disintegrate; voices and actions of discontent spread. In a desperate bid to cling to the reins of power, the Socialist Supreme Bureau threatened the nearby country of Karzeghistan with the use of chemical weapons if the oil-rich Sharig Plateau (including the strategically important area of Shapur e-Dalanper), an integral part of Takistani territory usurped by the British reign in the times of the Takistani monarchy, was not "immediately returned to the people of Takistan".

On June 1, 2012, a few days after the ultimatum, multinational forces including the United States Army, British Armed Forces, NATO and UNFORT armies, deployed bases in rebel-controlled territories and instigated Operation Arrowhead (as seen in ArmA II) to attempt to end the flashpoint. Their objectives were to neutralize the threat of ballistic missile attacks, nullify a possibility of a chemical attack on Karzeghistan, restore peace and prevent further civilian casualties - all before attempting any humanitarian or political actions[2]. The operation resulted in the death of Colonel Aziz of the Takistani Army and a defeat of the force.

Two months after the coalition forces' victory in the region, a new government was installed and attempted to restore the country. Insurgencies born from the remnants of the Takistani army formed in the country's mountainous regions and threatened the security of the region surrounding Zargabad. British paratroopers and mechanised infantry successfully quelled the insurgency, and the Green Sea region began a drawdown of combat forces the following year.[3]Private military forces began to enter the region for private security contracts. It is known ION, Inc., a PMC faction, was involved in a security contract to protect UN investigators.

The country was split into security administration regions in 2013, with British deployments dealing with the Karzeghistan border dispute, American deployments focusing on fortifying around the capital, Takmyr, and the border with Chernarus. NATO and other coalition forces assumed command of Central Takistan's security, monitoring and coordinating the New Takistani Army (NTA) training and control of central-south Takistan; however the British and U.S. deployments still retain a small operational presence within the volatile Central region. An independent deployment of Russian Federation troops - separate from, but cooperative with the coalition command structure - took responsibility of training and security and in the north and along Russia's significant border with Takistan. 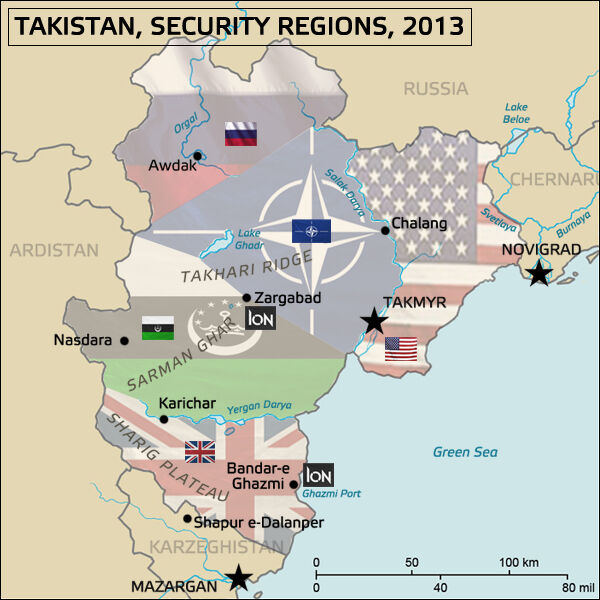 Takistani security regions in 2013 as seen in ArmA II: PMC.

Not much is known about Takistan after the outbreak of the infection. It is not known if the state is afflicted at all, or has been reduced to the anarchy seen in South Zagoria.