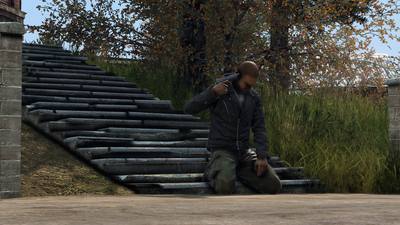 A survivor pointing an FNX-45 at himself.

Suicide is a game mechanic in DayZ Standalone. The game offers several options to kill your own character. Generally when suicide is brought up in discussion, most people would be referring to the option of killing yourself with an object.

Your survivor will get on their knees, depending on what you have in your hands will determine the animation. Once on your knees you have to left click in order to kill yourself. You are able to cancel the action at anytime before you kill yourself.

The accepted official way to kill your character is by pressing the corresponding gesture key (default: F11) on your keyboard with an appropriate object in your hand or choosing the option in the emote wheel on console and using the action button (a list can be found below). Regardless of your motivation, this method is useful if you're stuck somewhere and don't have any other method of killing your character. There are a variety of objects that can be used, including things as obscure as a pen.

The following is a list of items compatible with the suicide gesture. This list should be considered a work in progress at all times during development. Feel free to add to the list, but only if you can confirm that the item or weapon works.

Other Methods of Suicide[edit | edit source]

The official, gesture-based method of suicide isn't the only way of killing your character in the game. Some are quicker than others, depending on the situation your find yourself in.