From DayZ Wiki
Jump to: navigation, search
This article contains outdated information. Some or all of the information present may not be reliable until this page is updated.
Please help improve this article if you can. The Discussion page may contain suggestions.

In DayZ Standalone, there are four categories of Settings accessible from the game's menus. Here, we will cover settings for gameplay, audio, and video. You can find information about the game's controls in a separate article.

Note: Many of the controls for DayZ are the same as in Arma II, being that DayZ as a concept was originally conceived within that game's architecture. 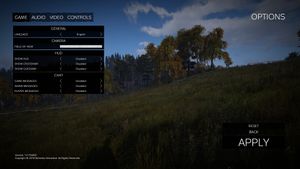 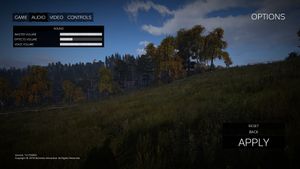 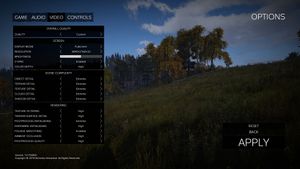 This is the first thing you'll see when looking at the Video settings and is used for making high-level changes to your graphics.

Changes made to this group affect how terrain,textures.shadows and objects are rendered.

This smaller group is for making alterations to how the game is shown in the context of your specific display.

The most advanced settings available in-menu, these are for tweaking the various visual "tricks" employed by the renderer for smoothness, color, etc.