Novodmitrovsk, or "Novo" for short, is a sprawling beast of a city located in the northeast of Chernarus, and west of Svetlojarsk. Its size can be compared to the large southern coastal cities of Chernogorsk and Elektrozavodsk and can be overwhelming for a first-time visitor not expecting such a large city in the northern region of the map. 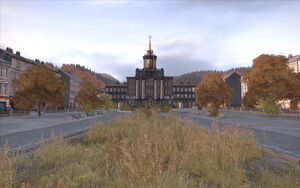 The placeholder town hall from Chernogorsk prior to update.

When Novo was first introduced in 0.45, it lacked the impressive city hall building we know today. That did not get added until 0.46. Instead, a placeholder town hall from Chernogorsk was used.