This page covers the Standalone version of DayZ. For information on the Mod see Mod:Navigating

Navigating is the always-important skill of being able to traverse the world you live in without getting hopelessly lost. Knowing where you are now, and how to get where you want to go, is key to surviving in an unfamiliar area. Chernarus is vast, and it's easy to lose track of your location in the wilderness, away from towns. There are multiple ways of finding your position or direction, which can aid you in finding a way to your destination safely. Although some may be easier than others, mastering all of them means that you'll never truly be lost in the wild no matter how far off the path you stray.

There are several devices which can be used to determine your position and/or direction, making the task of navigation much less difficult. 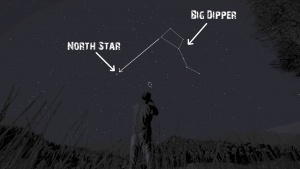 The sky above you is able to be utilized for the purpose of determining direction. It won't tell you where you are on the map, but it can at least help get you to where you're going.

It's best to start by finding the Ursa Major, one of the brightest constellations. When you find it, draw a line between the two stars at the front of the constellation. Follow it and you will find the Polar Star, which also marks the start of the Ursa Minor's "handle". It's a very big and very bright star, so finding it shouldn't be too hard if the sky isn't filled with clouds. Face the Polar Star and you will be facing north. 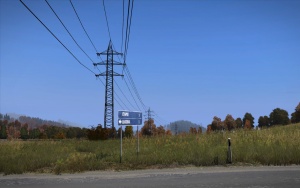 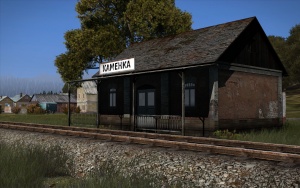 If you are in the countryside, in the middle of nowhere, look for signs of civilization such as: a road, railroad, or power lines. Following them will always lead you to a town eventually. If you really need to find a town, use a high vantage point, like a hill, to scan for buildings. Don't expect to find a metropolis at the top of a mountain, either.

Look for notable landmarks. You can find many such places to help figure out where you are.

This is the simplest method that can be used if you're near the shore and aware of your general location, since Chernarus connects with the sea in the south and east. If you're at the south coast, turn your back to the sea and north will be in front of you. On the east coast you will find north by having the sea to your right.

As fresh spawn, if you are able to see the coast, you can easily use the coastal railroad tracks to find your general whereabouts. Once at the shoreline, turn around so the water is at your back and run inland.