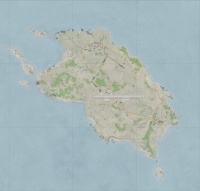 Utes is an unofficial map for DayZ, ported from Arma 2.

Utes consists of a single, small (5x5, whereas Chernarus is 14x10) island. It features two small towns (Kamenyy and Strelka), multiple crashed heli spawns, three military installations,and an airfield in the center of the island (including two barracks and three hangars). Utes takes approximately 15 minutes for players to traverse by foot. This provides an excellent player vs player environment, and frequent and mostly violent encounters can be expected.

The number of crashed helicopter spawns and barracks means there is a high likelihood of most players acquiring high powered weapons with a short period of spawning.

Utes features no vehicles, with the exception of the crashed helicopter spawns.