This page covers the Mod version of DayZ. For information on the Standalone see Survivors

Every player begins as a minimally equipped and notably unarmed survivor washed ashore on the coast of Chernarus. With only rudimentary gear, it's essential to Loot supplies and arms to survive against basic needs like hunger and thirst, as well as hostile enemies.

Upon spawning in, the player is also randomly given either Painkillers or an extra bandage in addition to the two items listed above.

Male Survivors have 3 different skins (Female Survivors have one), all of which consist of a black baseball cap and tactical vest. Survivor skins are not saved with character data and can change on every server log in.

A survivor must stay hydrated, fed, warm and healthy. Ignoring these basic needs will cause loss of blood or other ill effects, which will severely hurt survivability in the long run.

The survivor will need to stay hydrated. This need can be satisfied by drinking cans of soda or water from a refillable Canteen. Not fulfilling this need will cause you to lose blood over time. Be wary of drinking non-boiled water from canteens, as there is a chance that you may contract a disease. To boil water, one needs a filled water canteen, an empty soda can, or an empty tin can, and a lit fireplace or barrel to cook it over.

Food can be found as either Canned Food in residential areas and supermarkets, or harvested as meat from dead Animals. Not fulfilling this need will cause you to lose blood over time. Eating food is also a way to regain lost blood; the only other way to do so is to have another player give you a transfusion.

In order to harvest and cook meat, the survivor needs a Hunting knife, Wood (harvested from forested areas with a Hatchet or found from scavenging), and a Box of matches. Raw meat can be harvested from various animals such as boars and cows, which must be killed and butchered. The raw meat must then be cooked to make Cooked Meat by using a Fireplace. A lit fireplace creates both light and smoke, which can attract the attention of zombies and other survivors, especially at night. One may also light one of the many barrels found throughout the large cities and cook meat on them.

Basic common supplies – bandages, painkillers and heat packs – can be found on dead zombies, as well as in residential areas, supermarkets and many other buildings. More rare medical supplies – Blood Bags, morphine, epi-pens and Antibiotics – can be found in medical facilities and military locations such as hospitals, medical or military tents and military areas. They will also drop at helicopter crash sites, and the Epi-Pen and morphine on military zombies. Please note that the epi-pen and bloodbag may only be applied to other players; to use them on yourself, you must find another player to help.

One of the first things every survivor usually spends time acquiring is a weapon. Weapons in DayZ range from melee weapons, such as the Hatchet, to powerful rifles and explosives. Proper weapon selection depends on what the player intends to use it for, and more importantly, on what is available. 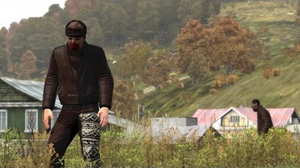 Zombies, often referred to as Zeds.

Zombies are infected humans that wander about cities and towns aimlessly. They will key in on movement and sound; once alerted to the presence of a player, they will begin to scream, run towards, and attack that player. Zombies can open doors, swim, and climb ladders, but they cannot walk onto docks, and they never run while indoors.

Zombies can be very dangerous if not handled properly. Becoming trapped in a small area by zombies is possible, and loud weapons can easily exacerbate a zombie problem. Zombies can cause bleeding, broken bones, unconsciousness, and death. They can also tackle players who attempt to run past them.

Viral zombies are stronger and harder to kill than normal zombies. If they have knocked you unconscious, they will eat you much quicker than standard zombies. Any damaged inflicted by Viral zombies run the risk of causing infections.

There are four ways to get dispose of zombies:

To conserve ammunition, it is advisable that players aim for headshots, especially when using weaker weapons, such as pistols. Because of the ArmA 2 engine, however, zombies will randomly duck and weave while running at the player, which makes getting headshots on an alerted zombie very difficult.

Breaking a zombies' line of sight will cause the zombie to slowly wander around the player's last known location for a few minutes. The line of sight can be broken by running around corners, through buildings, and through evergreen trees. Care must be taken to not re-alert a zombie with sound or extra movement.

Distracting zombies may be accomplished by throwing items on the ground. Flares and tin cans can work, but they are less likely to distract alerted zombies than Smoke Grenades.

Zombies will completely despawn when the player is approximately 300 meters from them. If zombies are visible from farther away, then another player is near them.

Survivors are other human players in the game. All players start out as normal survivors, but some may become bandits or heroes depending on how they treat fellow survivors.

Whether or not one should trust survivors can be a tricky question; it is often difficult to tell ahead of time whether or not a survivor is in need of your last can of beans. If the player does decide to approach another survivor, the proper way to do so is to say or type "friendly" in direct chat (NEVER use voice in side chat) to let the other player know that you do not intend to kill him. When holding a primary weapon, it is polite to lower it (default: double-tap control) when looking at a friendly survivor. When holding a pistol, look near (but not at) the friendly survivor. 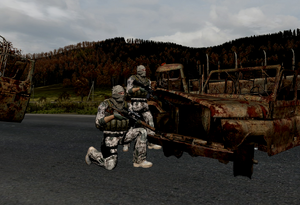 Two Bandits wait in ambush behind some wreck vehicles

Bandits are players who have murdered other survivors. They have a distinctive skin, which as of 1.7.7 is camouflage clothing with a shemagh, or head scarf. When one looks at a bandit at close range, a heartbeat should be audible; the faster and louder the heartbeat, the more murders the bandit has committed recently. It is inadvisable to trust bandits; in fact, most players have adopted a "kill on sight" policy with regards to the bandit community.

A player's status as a bandit is determined by his humanity score, which is a positive or negative integer. Players gain humanity points by giving medical aid, and lose humanity points by killing survivors and heroes. Humanity will also slowly return to 0 over time. Killing a bandit will never lower a player's humanity. 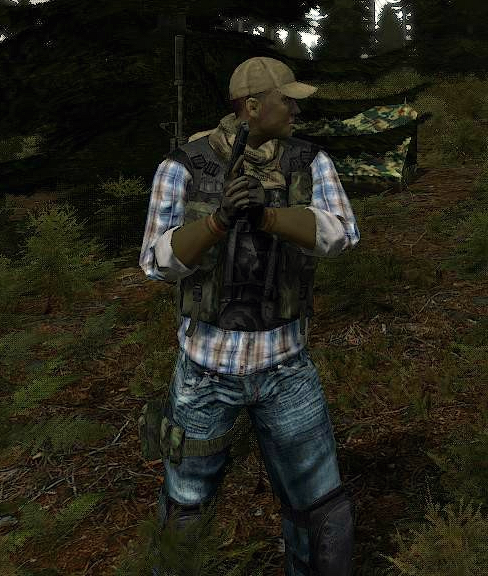 Heroes are survivors who have given other players medical aid or who have killed bandits. They are generally more trustworthy than the average survivor. Killing a hero is usually a bad idea, as doing so will cause your humanity score to plummilt. However, not all heroes are friendly, so be don't let your guard down near them.

Grouped players (both survivors and bandits) often raid Chernogorsk (Cherno) and Elektrozavodsk (Elektro) - the two biggest cities along the south coast. Another big target for survivors is StarY Sobor, one of the biggest towns in the North. Heading to these cities unprepared can be risky, though they are often scavenged by freshly respawned players before heading north. Looting high value military targets can be very dangerous. Enemy bandits will often take up positions to snipe anyone looking to loot. Extra precautions should be taken when around:

Watch out for survivors carrying scoped or military-grade weapons; these players are rarely out there to kill just zombies. Player-made fortifications such as sandbag walls, barbed wire, or tank trap obstacles can also identify a location frequently visited by other players. Barbed wire is not dangerous to players, but they cannot walk through it.

Most survivors head north after gathering immediate supplies or immediately upon respawning. Grouping in Chernarus can be difficult, so it is advisable to avoid any size of groups of survivors you don't know.