This page covers the Mod version of DayZ. For information on the Standalone see Oil Barrel 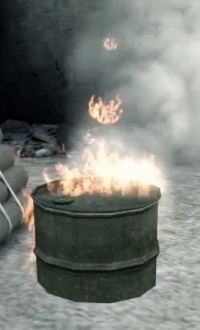 An Oil Barrel on Fire. Bottom half is glitched through the floor.

The oil barrel is an environmental object in Day Z that can be used to create a small fire from its top. It can be lit on fire by selecting the "Put on Fire" command when a player is close enough. The fire can also be put out once lit by selecting the "Put out Fire" command. You do not need a Mod:Box of Matches to light the Oil Barrel on fire, which makes the Oil Barrel an effective means of cooking for survivors without the need to create a Mod:Fireplace.

Oil Barrels have been identified with a couple of different building types, including General Military and Industrial locations. They can also be found in large cities such as Mod:Chernogorsk. Oil Barrels may be found near the tents at Mod:Stary Sobor and the medical tents behind the hospital in Chernogorsk.