Loot refers to items that can be found at loot spawn positions in most enterable buildings in DayZ, such as houses, hospitals, army barracks, and barns. Players can store loot in their inventory, backpacks, tents, and vehicles. Death results in a player's body being lootable, while their backpack remains usable. A player will not keep their items after death, a form of permanent death. Loot is accessed using the gear menu (default G) while under certain conditions, such as when a player faces a loot pile or when a player is positioned in the correct location around a vehicle. Tents are also accessed using the gear menu.

Loot is broken up into 7 main categories in DayZ. in order of rarity these are:

Civilian loot has a bit of everything. Often it has a good chance to spawn Food and small chance to spawn low tier Weapons. A lot of basic Equipment can be found here including the Map and Compass.

Enterable civilian buildings are the most common type of building in DayZ. These include:

Industrial areas are fairly common and they are the main place to look for vehicle components, Wire Fencing Kits and Toolboxes:

Farm areas can spawn food, drink, and wood, but also have a higher than normal chance to spawn basic weapons and ammunition. These include:

Farm areas can spawn food, drink, and wood, but also have a higher than normal chance to spawn basic weapons and ammunition. These include:

There are a few military loot areas on the map, and all of them are frequented by both Bandits and Survivors. Military areas spawn the best items currently in DayZ, often high end Equipment. They include:

Helicopter Crash Sites can be found in various locations throughout Chernarus and are most commonly found on open fields or on hillsides. The locations of the crash sites vary for each server. These sites are highly sought after because they spawn the rarest weapons available in the game, such as the DMR and M249 SAW.

Crash Sites will randomly spawn at any of the 200 locations across the map, though they will almost always spawn in the North-West of the map, near the North West Airfield (NWAF), where the majority of the spawn points are located. However, the can occasionally spawn farther south - even on the coast - though this is rare.

Crash sites do not spawn at the server startup, but during the course of the server's runtime. This means that it is best to search for crash sites after several hours of server uptime, as there will be far more spread across the map than directly after a restart. 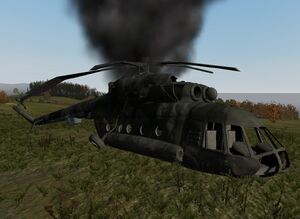 The following is an (Incomplete) list of weapons and equipment known to spawn at Mi-17 Crash sites. Feel free to update this list with any information you have.

A Survivor poses next to a UH-1Y Helicopter Crash Site

The rarest type of crash site, These contain weapons and equipment used by the United States Marine Corps, and thus are the most sought after crash sites. They can be identified by the Grey color of their hull and it's similar appearance to the UH-1H Huey, Which it replaced in USMC service.

The following is an (Incomplete) list of weapons and equipment known to spawn at UH-1Y Crash sites. Feel free to update this list with any information you have. 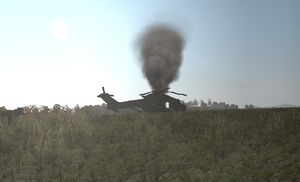 These British helicopters spawn both British and German weapons, and are the second most common crash site, after the Mi-17. Although to the untrained eye the Merlin may look similar to the Mi-17, they are completely different helicopters.

The following is an (Incomplete) list of weapons and equipment known to spawn at AW101 Crash sites. Feel free to update this list with any information you have.

Loot Crash sites with caution. The large smoke plume that alerted you to the Crash may draw in other players. Keep in mind that loot does not Re-spawn or De-spawn at crash sites, so take your time. Scan the area around the Helicopter and ideally have someone cover you. Do not neglect safety. 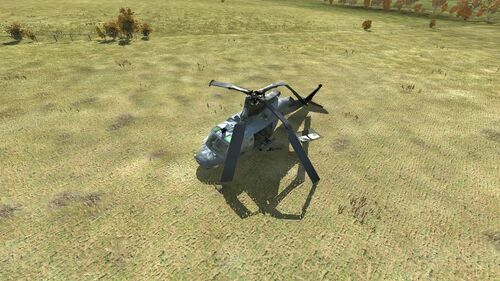 Medical areas have a large amount of medical supplies. These are the only places where Mod:Blood Bags may be found. These include:

There are several types of weapons in DayZ. All weapons are modeled after their real world counter parts and they behave as such.

Some weapons are capable of accepting Attachments.

Rifles, Submachine guns, Shotguns and most Sniper Rifles will fill the Main weapon slot. These will take 10 slots in the Backpack

Sidearms take 5 slots in the Backpack.

Please Note The exact spawn rate and spawn location of these weapons can vary depending on what server one plays on.

Ammunition refers to the magazines, clips, rounds, cartridges, shells, bolts, and 40mm grenade launcher rounds that the weapons in DayZ use.

M203 HE grenade rounds are used to inflict explosive and fragmentation damage in a small area. They require a minimum arming distance.

When shot upwards into the air, M203 'star parachute' rounds will provide good illumination over a wide area for around 40 seconds.

For the DayZ Standalone version, see Food and Drink

Consumables are items which disappear after use. These include food, water, medical supplies and tactical consumables. Many are used simply by entering the gear menu, right-clicking on the desired item, and selecting the 'use' option.

There are various food types available in DayZ. These replenish the hunger meter and increase the players blood volume by a varying amounts. All food types now have a diminishing effect so the more you try and eat at once, the less blood you will get in return.

Drinks quench the thirst of a player.

Water has a risk of carrying disease, and should be boiled before consuming.

Provides a cure to whatever Status Effect the player is suffering from.