This page covers the Mod version of DayZ. For information on the Standalone see Deer Stand 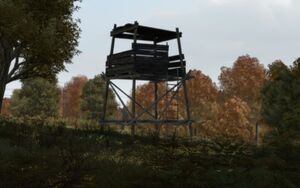 A deer stand located East of the Oilfields

Deer Stands are hunting posts placed around Mod:Chernarus. They are usually near large fields where Mod:Animals are likely to spawn, and they often contain some kind of ammo and occasionally low-tier weapons such as the Lee-Enfield and Shotguns, and junk loot such as Flares. Deer stands do not spawn military-grade weapons.

Deer stands can be a good place for a new survivor to find Weapons without having to enter a larger structure such as a Barn, which will contain more Infected and will also be more highly traveled by other players.

When looting a Deer Stand, it is important that you do not alert any of the nearby zombies of your presence. If you attempt to climb into a deer stand while being chased by zombies, They may follow you up and block the exit, pummeling you until your death. Instead, crawl up to the Deer Stand from behind or use Flares to draw the zombies away from the ladder.