From DayZ Wiki
Jump to: navigation, search
This article contains outdated information. Some or all of the information present may not be reliable until this page is updated.
Please help improve this article if you can. The Discussion page may contain suggestions.

This article may need cleanup to meet quality standards.
Please help improve this article if you can. The Discussion page may contain suggestions.

You can help DayZ Wiki by uploading an improved version of this image.
If the problems have been addressed, please edit this page and remove this notice. It will start with {{Reupload and end with }}.

The M3S, previously known as the V3S, is a vehicle in DayZ. It was the first functional vehicle to be implemented in the game during the Alpha stage of development back in late 2014. It was reworked and added back to the game in the 1.10 update.

The M3S is the slowest vehicle in DayZ. It has a maximum speed of around 50 kph when driving on flat ground or down a slight hill.

This variant has a material cover over the cargo area. It is the first M3S variant to be reintroduced in v1.10 on the new vehicle system.

This variant lacks the cargo area of the other variants, and was used for basic transportation and simple storage. It was removed in 0.63 awaiting reimplementation. 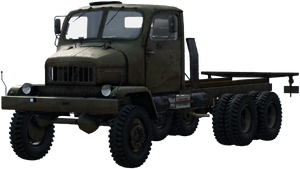 This variant has a dedicated cargo area and is favoured for its increased cargo capacity, but is slower due to its extra weight. 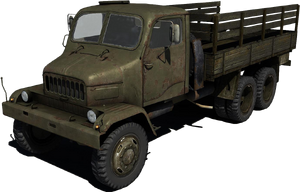 The following 'Engine' and 'Chassis' parts are necessary for an operational M3S:

The 'Body' parts are optional, but recommended for the safety of vehicle occupants:

2x M3S Wheels can be stored in the spare wheel compartments on the rear of the cabin. The compartment holders need to be opened to add the wheels, however.