From DayZ Wiki
Jump to: navigation, search
You can help DayZ Wiki by uploading an improved version of this image.
If the problems have been addressed, please edit this page and remove this notice. It will start with {{Reupload and end with }}.
This article refers to the Livonia terrain only. For the Chernarus variant, see Livonia:Landscape

The Landscape of Livonia is defined by its natural landforms and features. The forests, hills, fields, and waterways make up the geographical layout of the terrain and separate settlements. 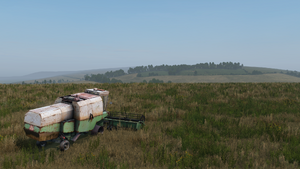 Despite approximately half of its land mass being shrouded in trees and woodland, there are no fields or forests in Livonia that bear an official name. This is likely due to the complexity and all-encompassing nature of the southern forests. Most of the dense forest in the region is made up of confierous and deciduous trees such as pine and larch, meaning thick ground cover from pine needles and leaves is present. 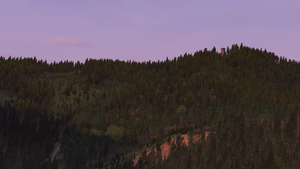 As its name suggests, this category is a listing of all named areas of prominent elevation in Livonia. They are most ideally used for orientation and getting an overview over the surrounding area. In Livonia, there occasionally host installations such as Radar Bases and Lookout Towers. These named peaks include: 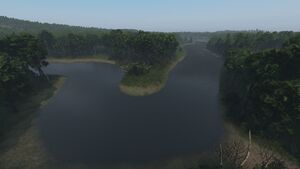 A view of the Biela River.

With a strong influence from waterways, Livonia has its fair share of rivers and lakes. These natural waterways can be used to gather water (albeit unclean), fish for survival, and lower your character's body temperature.

Local Areas are locations given a name that do not typically fit into any other category. This could be a valley, a small isolated dwelling, a roadway, etc.