From DayZ Wiki
Jump to: navigation, search
This article is a stub. You can help DayZ Wiki by expanding it.

The Green Sea is fictional body of water located somewhere around the Caucasus Mountains, south of Russia and east/southeast of Chernarus. In reality, the Green Sea is likely the Caspian Sea, as evidenced by ArmA II's official launch trailer[1], which appears to show that Chernarus is located on the Western side of the Caspian Sea, near Georgia and Russia. An in-game map shows the Green Sea borders Chernarus, Takistan and Russia, while also encapsulating islands such as Lyutyi, Moschnyi and Utes. 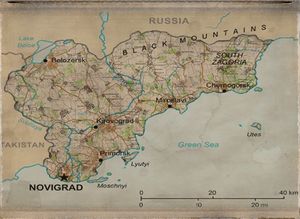 The Green Sea as seen on a map of Chernarus in-game.

Other references made within ArmA II content shows that additional countries beyond Takistan also share a coastline with the Green Sea, notably Karzeghistan and potentially Ardistan.[2]