Fishing is the process of catching wildlife in the water and is one way to collect food for sustenance. There are two ways to catch a fish in DayZ Standalone: by using a fishing rod, or by using some sort of trap. (Fishing traps aren’t implemented in 1.06)

Tools of the Trade[edit | edit source] 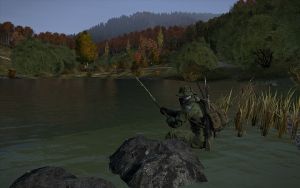 In order to use this method, you need to be in possession of a Fishing Rod, but as an alternative you can craft an Simple Fishing Rod. You'll also need either a Fishing Hook or a Bone Fishing Hook in order to attach Earthworms for use as bait. You must dig up worms using a knife or a pickaxe. Every time you catch a fish, you lose the bait that was used, so worms will need to be re-added after every catch.

This method can be used to catch Carp in fresh water (ponds) and Mackerel in salt water (sea). There is a small chance of pulling out a pair of Wellies when fishing. 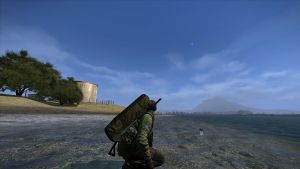 Entirely different to the process of using a fishing rod, using a trap to capture fish is a more passive approach to the activity. There are two very different traps available for use by players, but both options are craftable items and cannot be found as loot. One is the Small Fish Trap, constructed from a plastic bottle, used for catching smaller fish (as its name implies). There is also the much larger Fish Net Trap which can be used to catch fish of a more "normal" size. Once you have crafted a trap, you will need to add worms as bait -- a consumable that must be replaced with every catch, the same as using a rod.

The smaller of the traps is used to catch Sardines, and the larger variety is capable of snaring Mackerel for its user.