From DayZ Wiki
Jump to: navigation, search
You can help DayZ Wiki by uploading an improved version of this image.
If the problems have been addressed, please edit this page and remove this notice. It will start with {{Reupload and end with }}.

Cooking is the process of turning raw food -- such as meat collected by hunting wild animals or produce grown via horticulture -- into prepared food using a variety of methods, and is one of the main sources of energy for people surviving in the wilderness.

Players are able to utilize a variety of cooking methods, all of which are accomplished with one of two tools: a Cooking Pot or a Long Wooden Stick. Choice of cooking method will depend upon available resources, tools at the player's disposal, and their end goal for using the cooked food.

The process of converting raw food into other states has several purposes behind it, but the primary drive to do so is making the food more useful to players. For meat, that means killing potential diseases to make it safe for consumption; for produce, preventing it from rotting and becoming unsafe to eat after sitting too long.

Food typically has varying nutritional value between its different states, meaning that certain ways of preparing it will have advantages over others in regards to energy, water, volume, or all of the above.

Overcooking food, regardless of what is being cooked and the method used, will result in the food becoming burned. Burned food is essentially a waste, because it cannot be eaten without making the person sick.

What to Cook[edit | edit source]

A complete list of cook-able items can be found below.

How to Cook[edit | edit source] 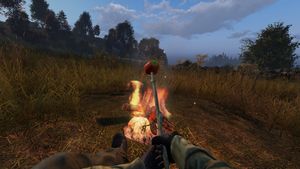 Using a stick is the simplest method of cooking in DayZ. Players can obtain a Long Wooden Stick by using a knife to cut one from a bush, or interacting with a bush with your hands. Once they have obtained a stick, they only need to put the stick in their hands and attach the item to be cooked (only one at a time) in order to prepare it for cooking. A fire of some sort is necessary to then cook the food, as it is with all methods. Players can use any form of fireplace to cook items this way, including those found inside of certain houses.

Once the player has the stick and food item ready to be cooked, and they are sitting close to a fire, they must then select the option Point the Stick Towards the Fire to do the action described. They must then remain still (moving will cancel pointing the stick at the fire) while the food heats up and eventually changes its state. Once the food has become cooked, detach it from the stick quickly or it will become burned soon enough.

Using a stick to cook results in food items becoming Baked. This is the only possible state that can be achieved with this cooking method because there are no variations on it. 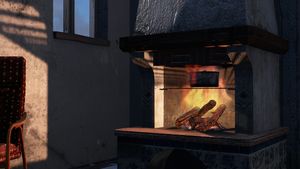 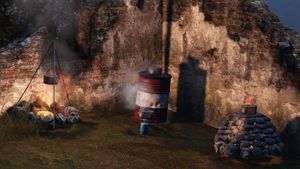 While it does have to be found as loot rather than being gathered practically anywhere as a resource like the stick, the Cooking Pot is arguably far more versatile, making it worth your time (and inventory space) to carry one around if you plan to cook regularly. There are three possible cooking methods when using this piece of equipment, and it can be used in conjunction with a Portable Gas Stove or any kind of advanced Fireplace: those found in houses, player-created stone ovens, or alongside a tripod.

To cook with the pot, players must first choose a desired cooking method and prepare the pot accordingly. Then, they can add up to 12 slots worth of food items at a time to the pot. After you have completed preparations, simply add the pot full of food to the fireplace and wait for it to heat up. After a short time (1min 30), the food will be cooked and can then be consumed. In order to check on the food, players must remove the pot from the fire to view its inventory; this is in contrast to the stick which allows you to watch the food as it is being cooked.

Details can be found below on how to perform each method of cooking with the pot.

Boiling -- Before cooking, fill the pot with water.

Baking -- Starting with an empty pot, add lard as an attachment. Do not add water.

Drying-- Cook in a pot that is otherwise empty: no water, no lard while keeping items to be cooked under 100 degrees.

Burning -- Cook in a pot that is otherwise empty: no water, no lard.