This page covers the Standalone version of DayZ. For information on the Mod see Mod:Castles 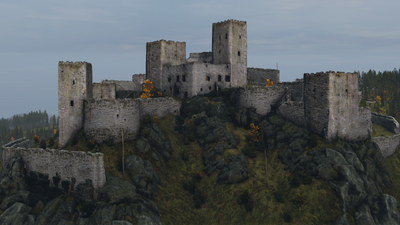 Castles are historical locations in DayZ. As ruins of the Middle Ages, they remain today as beacons for navigating, places of shelter, and sources of loot.

Due to their prominence, the history of Chernarus is notably characterised by castles, keeps, and fortresses - built at the turn of the 11th and 12th century by Duke Kozlov, for the means of protecting important roads and grounds, which were often attacked from the sea and by northern neighbors.[1] In Livonia, Branzów Castle remains the only one of its kind, through its origins likely stem from the same need to defend and oversee the nearby settlement of Topolin.

Castles vary in configuration, shape, and size, but all follow a similar layout; an outer wall encompassing a Bergfried Tower, and perhaps some stone bastions and archways. Repurposed as tourist attractions for the modern era, most also sport features such as wooden stairs, kiosks, and pubs.

There are several castles still standing in South Zagoria, as named on the Tourist Map and on hiking trail signs. These named locations are: